Last Christmas, after having just submitting my doctoral dissertation to the Theology Department in preparation for a doctoral defense in February, I spent the Christmas break decompressing and, other than enjoying the normal liturgical beauty of Christmas, doing a whole lot of quiet recuperation (anyone who has the prepare a graduate-level dissertation knows why that’s needed–it’s a sprint at the end to finish writing and turn it in). This Christmas, with the S.Th.D. firmly placed behind my name in official academic stationery and a new job at my university (Publications Director, although Publications Manager might be a better translation) alongside my teaching duties, the work schedule and rhythm simply changed a little. I think students and professors look forward to a holiday break; usually the plan is to catch up on things while not neglecting the celebration at hand, even though often you celebrate more and catch up less. I’d say this year was still more celebration than catching up, but I suspect Our Lord had that in mind.

In my case, work lead to more celebration. Since I work as a professor for the Theology Department and am also Publications Director, I work in two sections of the university, with two Christmas parties (fortunately on two different dates). Sometimes you just have to take one (or two) for the team… I didn’t accept double gifts at least, but everyone was very joyful, and not just because of the wine. It’s great working at a Catholic university because people treat each other truly like human beings, and you can’t fake camaraderie for long. The non-academic section organized a raffle with the proceeds benefiting the poor in nearby Santa Marinella. 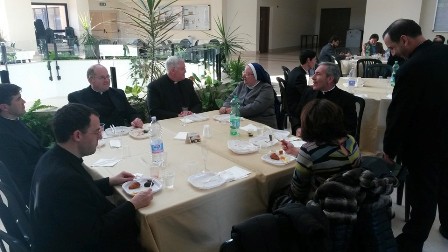 On December 23rd I went to St. Peter’s to celebrate the ordination anniversary of some of my brother Legionary priests. We were ordained the same year (2006), so they adopt me as part of their class (I was ordained a few weeks earlier, but we all studied theology together). The nice thing about December 23rd is it’s the perfect day to transition from work mode to Christmas mode. It was my first time celebrating in the Chapel of Our Lady-Queen of the Hungarians down in the crypt below the Basilica. I didn’t even know it existed, and the artwork was striking, especially the life-sized statue of St. Stephen, the first king of Hungary, on the steps that lead down into the chapel. I have to admit the statue was life-like enough that it startled me as we processed in, since it seemed like someone was asking for a handout. The image of the blessed mother behind the altar was also interestingly rendered, since the chapel was inaugurated with a Mass by St. John Paul II in 1980 and the artwork was a newer style, but tastefully done. 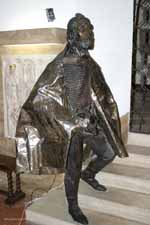 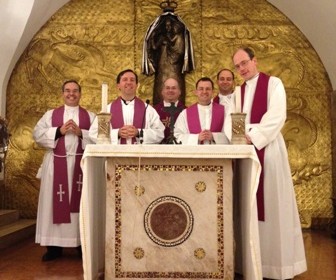 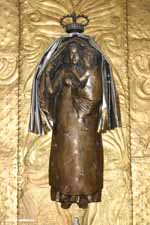 The morning of Christmas Eve was wonderful for various reasons. When I can (and usually I can) Christmas Eve is the day I disconnect from work and prepare to welcome the Christ Child. We awoke to the early gift of a rainbow (the picture below is from outside my window). Later in the morning members of the community who were free gathered in our lounge to decorate it. 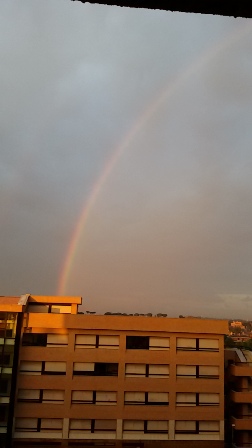 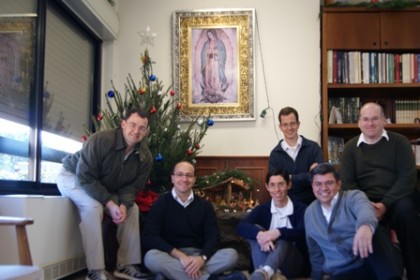 In the evening we sang solemn Vespers in Latin, and then after a delicious dinner we gathered by community to receive our patron saints for the year (I received St. Agnes for this year) we celebrated Midnight Mass and turned in for the night (morning?). The next day my community served the brothers for lunch (an annual tradition), and I offered a Mass for family and friends.

On December 28th I helped for the Year of Mercy hearing confessions for the first time at the parish of San Salvatore in Lauro. Various parishes in the area of St. Peter’s have been designated as places for pilgrims to come for confession before going to St. Peter’s Basilica and going through the Holy Door. The Legionaries are helping at this parish, which has relics of St. Pio of Pietrelcina (Padre Pio). However, in February the parish will be hosting both the body of Padre Pio and Saint Leopold Mandić, two of the greatest confessors of the last century. What an honor to confess in the presence of these two saints. Come visit the saints and stay for confession if you visit Rome this year!

On January 3rd we celebrated the 75th anniversary of the Legion’s foundation with a concelebration and inaugurated a jubilee to celebrate our 75 years of serving the Church. All branches of Regnum Christi participated, and the all the consecrated members (Legionaries, consecrated men, and consecrated women) had a celebration dinner.

Liturgically the Christmas season ends with the Baptism of the Lord (last Sunday, January 10th), but the celebrations conclude on January 6th, the Epiphany, since on that day we receive gifts from the Magi and it’s the last day of Christmas break for the university. During the Christmas break I’d been in and out of the office, but after January 6th it was back to work: the last few weeks of the first semester before exams begin.