I should have written this blog post before the one regarding my trip to New Hampshire, but it slipped my mind until I stumbled across the photos on my cell phone.

During the month of May my community did our annual Marian pilgrimage to the the Shrine of Our Lady of Mentorella. 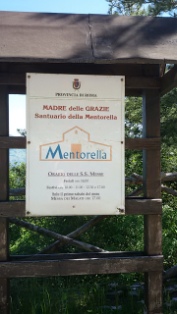 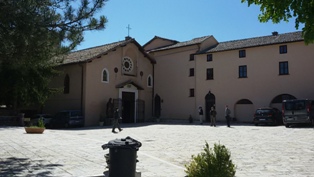 The site of the shrine has a history going back to the second century when St. Eustachius converted to Christianity there and was later martyred. The emperor Constantine decided to build a basilica there in honor of St. Eustachius and it was consecrated by Pope Sylvester I sometime before 335 A.D. In the sixth century the property was given to the Benedictine monks of Subiaco and some scholars believe it was one of the twelve abbeys founded by St. Benedict himself. In the thirteenth century a wooden statue of Our Lady that sits in the shrine even today was created. 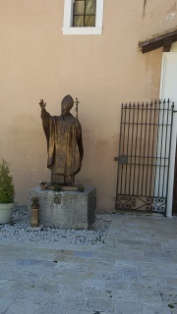 The Benedictines abandoned the shrine in the fourteenth century and it fell into disrepair until the seventeenth century when a Jesuit, Fr. Athanasius Kircher, rebuilt the shrine and restored devotion to Our Lady of Mentorella. When he died he asked that his heart be buried there, and Pope Innocent XIII asked the same for himself. In 1857 it was entrusted to the Congregation of the Resurrection, who own and care for it today. St. John Paul II visited it often (it is cared for by Polish priests), and Pope Benedict XVI visited it in 2006.

We arrived late morning and had a concelebrated Mass with homily in the tiny shrine (we all managed to fit in the sanctuary for the concelebration, but it was tight). After Mass there was time for hiking in the mountains and hills surrounding the shrine (the shrine is up in the mountains in the area of Capranica Prenestina, a thousand meters above sea level). The Resurrection fathers were gracious enough to let us barbecue in a beautiful little cultivated terrace where they have cookouts. After lunch we chatted and played table games for a while before returning to Rome after honoring Our Lady and enjoying some majestic views. 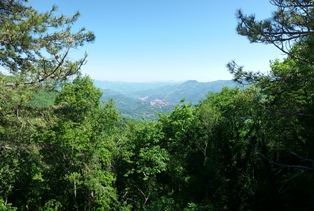 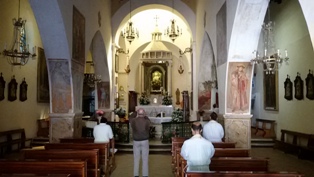